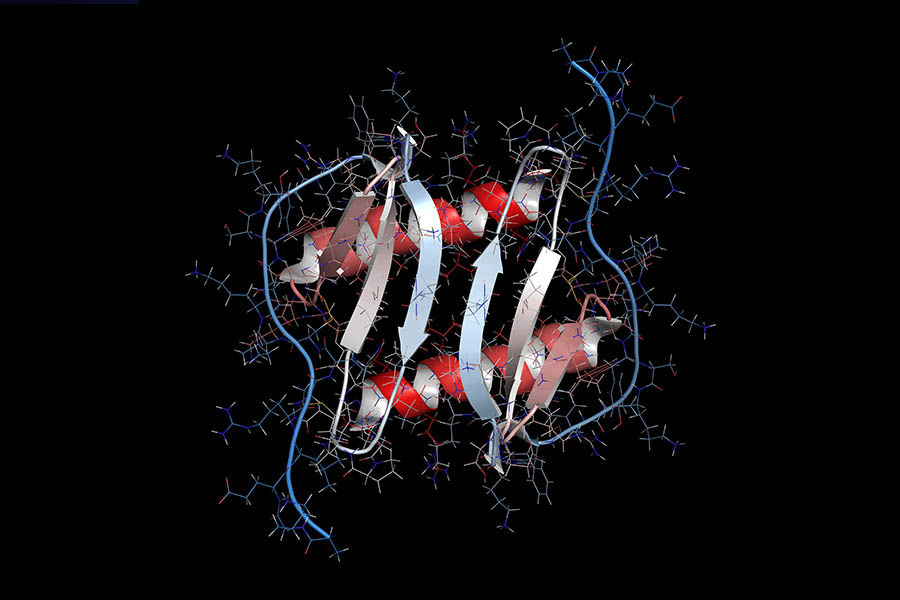 Isotope labelling has been used for over 40 years to facilitate the study of protein structure using nuclear magnetic resonance (NMR) spectroscopy. During that time, traditional expression systems such as in vivo protein synthesis were the preferred options for fabricating the labelled proteins. However, nearly a decade ago, it was discovered that cell-free protein expression offers an abundance of beneficial properties making it more adapted to the addition of isotopes than first thought. Here, we give you our top five reasons to use a cell-free system to label your proteins for your NMR study…

Nuclear magnetic resonance (NMR) spectroscopy studies are widely used in structural genomics to obtain valuable information about the physico-chemical shape of proteins. To simplify NMR spectra, it is possible to integrate amino acids with isotope labelling of selected atoms – 15N, 2H or 13C, for example – into the target protein. The first step in an NMR study is therefore the expression of a protein containing the isotope-labelled molecules.

The principal of protein labelling is the idea of replacing specific, naturally occurring, amino acids in protein structures with isotope-labelled ones. Whilst E. coli cells were the most widely used, it was discovered that insect cells provide a better expression system for proteins of human origin. In traditional in vivo systems such as these, commercially available isotope-labelled amino acids are added to the culture medium as ammonium chloride, glucose or deuterium. These unnatural amino acids are absorbed by the cells from the isotope enriched medium and metabolised, eventually finding their way into the proteins they produce.

A drawback of this procedure is that large quantities of labelled molecules must be added to the medium in order to achieve enough labelled protein product. Also, the labelled molecules can negatively affect protein synthesis itself. Hence, whilst conventional in vivo expression systems are probably the most common current method used to label proteins, they are not necessarily the best. Cell-free production essentially uses an extract of cellular machinery to carry out protein transcription and translation in a tube rather than a host cell. This method has proven itself as a highly effective way of obtaining isotope-labelled proteins for NMR studies.

Why is cell-free better?

Recent developments over the past few years, with huge efforts to increase the expression yield, E.coli cell-free protein synthesis systems can be used to produce several milligrams of recombinant protein; the quantity required for NMR studies. In short, cell-free protein expression provides the most efficient, cost-effective protein expression system. Yet even more than that, the advantages of cell-free systems are even providing new scope for opportunities to perform NMR studies that were not possible before.

A common issue when synthesizing isotope-labelled proteins is what is called scrambling. This is where the isotopes in an ion become mixed up between different positions on the molecule due to chemical shift. In cellular expression, much of the scrambling is caused by the action of endogenous transaminases from the metabolic pathways in the host organism. Whilst it can be reduced using certain strains of E.coli, the process imposes constraints. In cell-free protein expression, scrambling occurs to a much lesser extent. This is because the metabolic enzymes present in the cell-free reaction mixture are limited, whereas in living cells they regenerate. Moreover, it is possible to add inhibitors of amino acid metabolism to the reaction mix to further improve this effect. Amino-acid selective isotope labelling can therefore be performed more easily in cell-free systems.

3/ No competition with cellular growth

Cell-free systems rely on cell extract to carry out protein synthesis, meaning that the much of the “housekeeping” cellular machinery is not present. Indeed, using in vivo protein expression, the cells are living, and therefore continue to produce proteins other than the target protein. This involves two drawbacks. Firstly, it induces the need for a purification step to separate the desired protein from the unwanted product, which increases production time and cost. Secondly, the unnatural amino acids are also integrated into the structures of these unwanted proteins, wasting costly isotope medium. In a cell-free system, there is no competition with cellular growth meaning that only the desired proteins are labelled, reducing the amount of labelled amino acids required. But also, removing the need for an expensive and time-consuming chromatography purification step.

There is also the possibility to produce labelled proteins with cell-free that simply cannot be done any other way. This includes toxic proteins that would normally kill the host cells using in vivo, or proteins embedded in a membrane. Cell-free is ideal to produce toxic and membrane proteins, and the process can easily be optimised to include unnatural amino acids.

Moreover, using cell-free permits the addition of a bigger range of labelled amino acids. This is because, unlike in vivo methods, interconversion of amino acids can be blocked permitting the effective insertion of isotopic, and unnatural amino acids. Thus, overall, labelling with cell-free uses less isotopic amino acids, which are expensive.

Going further than ever before using cell-free…

Cell-free protein synthesis is an effective and practical method for the isotope labelling of proteins. It provides brand new possibilities for NMR methods. So if you, like many, are looking for a more economical expression system, cell-free is the way to go. At Synthelis, we have the expertise required to help you effectively produce isotope-labelled proteins for your NMR experiments using cell-free.